I have been traveling a lot. I love it and I chose to do it, but it gets tiring just the same. Since my last post, I flew to Oita Prefecture on Japan’s Southernmost major island of Kyushu for a work seminar. I learned all about the Walk Japan business in what was the largest gathering of foreigners fluent in Japanese I have ever attended. Later I flew to Tokyo and took the bullet train to Nagano where we had a 4th of July pickleball event (not really, we just happened to be playing pickleball on July 4th). I came back to Tokyo, only to wait all day for a plane to Portland that I was destined not to board (I’m flying standby). I then got a great last-minute deal on a hotel close by, waiting the next day for another doomed attempt at Portland. Frustrated, I got a bus to Tokyo’s international airport and flew to Seattle, where I am currently staying in a youth hostel waiting to take the bus to Portland in the morning. It is an elusive city.

All of this waiting, however, provided me with plenty of time for reflection and for work on my travel website, which I will reveal soon. My conclusion upon pondering is that I am thankful for where I am right now. A year ago after coming back from Africa I didn’t know what I wanted to do. More importantly for me I think, I didn’t know where I wanted to do it. I now have a couple of jobs I love and creative, interesting projects. I am working towards bigger and better things. Life is crazy but it is so much better than being bored.

Some people mistake my like of Japan for dislike of America. I don’t dislike the States, it just never felt like home for me. It doesn’t make me want to dig down and stay. I am a little fish in a very big pond, and while speaking Japanese makes me an interesting novelty, it’s not necessarily very useful. Sometimes I describe it to people like this: “In America, I look like I should belong and as the conversation goes on people gradually realize how different we are. In Japan, I obviously don’t look like I belong, but as the conversation goes on people realize how similar we are.” I like that. People tell me all the time that as a foreigner, you can never fully be accepted as Japanese. Perhaps that’s true, but instead of trying to be accepted as Japanese I think I’m content with just being accepted.

A final note to please use common sense and at least gain a cursory knowledge of world events when traveling abroad. Also, eavesdropping makes for great blog material. The other day in Narita Airport, I overheard a 19-year old American kid from Texas chatting up three Russian girls. After hearing they were from Russia, he couldn’t remember if Russia was still communist and said he vaguely remembered something about a wall. He then asked if they were Sophomores or Juniors in high school, at which point they had no clue what he was saying and the conversation started falling apart. I’m not saying everyone needs to be expert world historians – just be interested in the world around you and aware that language can be a barrier or a bridge.

That’s all for now. I’m headed tomorrow to my brother’s wedding in Eugene, Oregon. Congratulations Jon and Makaya, I’m happy for you.

Working at the front desk of a hotel, I’ve come to learn that my job is primarily about two things: Making people feel welcome and solving problems. And there are plenty of opportunities to practice each. That’s the challenging thing about working here, but also what makes it interesting. No two days are the same, and just by helping someone have a memorable stay, I have accomplished something. The Japanese staff and I joke about there being a different storm to weather every day, but I have grown the most by dealing with these “storms”. When we look back together, those are the things we remember and laugh about the most.

First, as I mentioned in a previous post there was the skier on New Years Eve who went down the wrong side of the mountain, calling at 4:30 PM (dusk) to say he was lost and couldn’t walk through the deep snow. Being the only English speaker, I attempted to calm him down and suggest what I would do in the same situation, knowing he wasn’t likely to make it out alive. Thankfully, through a series of fortuitous circumstances and dumb luck he did survive, and with a few tears and apologies life went back to normal. From that however, Ed the Australian taught me to appreciate all of the blessings and opportunities that I didn’t even know I had. Life could end so easily in so many ways. Also to avoid idiotic moves like skiing off the back side of a mountain by yourself in a foreign country when there is a blizzard coming in.

Next, there was Edith’s broken bone and insurance situation. While going off a jump at a local resort, she completely shattered her right arm. The doctor said she needed surgery but couldn’t fly for a week afterwards. The insurance needed proof of her injuries before they would pay for her surgery or fly her home. And the Japanese hospital only produced reports in Japanese, which the insurance company in Hong Kong could not read. The situation took a couple of days to resolve, and several times she sat – slumped rather – in the hotel lobby, sobbing. I did all I could, and learned that while everyone has the strength to deal with tough situations like this, a little moral support makes all the difference in the world.

Then there was Hubert the angry American. His name wasn’t actually Hubert but for some reason that’s what I’m calling him. He wanted everything for free because he was important (self-proclaimed) had photographed in 45 countries, and worked for all kinds of well-known magazines (repeating this several times). Hubert met an American student during his stay, who skied with him and helped him photograph the ski resorts of Shiga Kogen. Said student stayed an additional day to help Hubert, but failed to inform the hotel that he would not be checking out. Despite this, Hubert demanded that we also let this student stay for free. When I said this was obviously against hotel policy, I was told to “shut the f up” (4 times), that I did not understand the big picture, and that this was the worst service he had ever received (having of course, photographed in 45 countries across the globe for numerous other important magazines and publications). I made the mistake of laughing at him, and got a further soliloquy threatening to withdraw the ad in the important magazine he was photographing for. The whole situation was a mess. I learned from Hubert, however, to never ever treat someone like they are less than you, no matter how successful, rich or famous I might or might not become. As Federer would say, “It’s nice to be important, but it’s more important to be nice”.

Finally, there are the crises that we cannot resolve. I received a call yesterday saying there had been an avalanche on the mountain, and two Argentinian guys from our hotel had been involved. They found the bodies immediately and attempted CPR, but they had died upon impact. Actually I’m not sad for them: they traveled the world skiing and died painlessly while living out their passion. I am sad for the families. How do you tell someone that news? We have so little control over the things that we involve ourselves in every day. A single slip, a careless moment, a jerk of the steering wheel and our lives are over. That could be depressing or liberating. If you are reading this, you are probably healthy, at least somewhat wealthy (having a computer) and definitely alive. There is a lot to be thankful for. The suddenness and finality of death remind me to live every day the way we were meant to.

Those are my thoughts for today as I reflect on some sad, trying, and rich experiences. 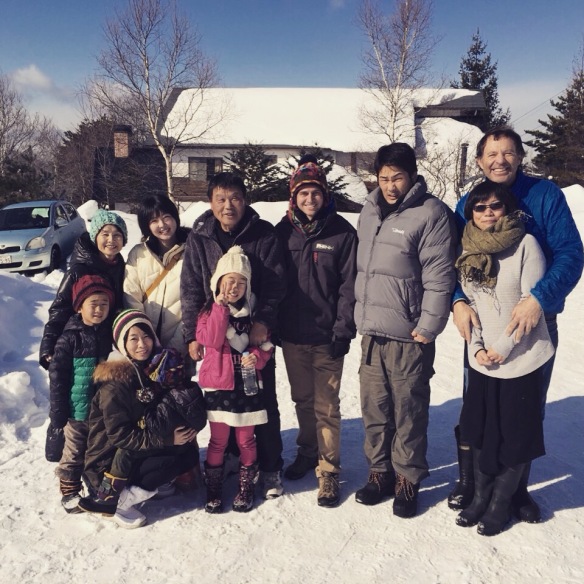 Hanging out with good friends in Sugadaira

Fernweh (German) – Wanderlust, a craving to travel, being homesick for a place you’ve never been

I am what you would call a Third Culture Kid (TCK), someone who sort of belongs, but can never completely belong in either the country they grew up in or the country they are “from”. As a member of this tribe of misfits, my childhood consisted of getting to travel the world, being stared at, pretending to know who The Spice Girls were, and feigning excitement when someone wanted to hear the exotic white boy speak Japanese. As a kid, I really didn’t appreciate the value of living between two worlds enough.

As an adult, the symptoms of my incurable condition include compulsive travel, speaking 3.5 languages and having 4 different jobs at once because I don’t know what I want to do when I grow up. My stories usually start with “when I lived in Kenya” or “that time when I was studying abroad in Egypt” and end with something I probably shouldn’t have done but I’m glad I did anyway. Now I love the perspective I’ve gained from my experiences and wouldn’t trade them for anything.

However, I do often think about how nice it would be to have a place called home. I could easily answer the question, “where are you from?” without any caveats, explanations or long stories. I wouldn’t feel like the grass was greener somewhere else. I wouldn’t miss people on the other side of the world that I can’t spend time with for the forseeable future. I guess people always want what they can’t have though.

I just watched a Netflix documentary on Laura Dekker who at 16 became the youngest person to ever sail around the world alone. She has an interesting quote in the film when someone asks her where she is from. It goes something like this. Shopkeeper: “So you’re Dutch?” Laura: “Yeah… well no. I don’t really have a home. Home to me is Guppy” (her sailboat).

I think Guppy was home to her because it signified purpose, a goal, a plan: In her case sailing around the world. I’m finding that it doesn’t matter as much where I live; it’s more important to have a compelling reason to live. That is what provides contentment and joy and a fulfilling life. In Kenya, people would often ask me if I were homesick. I would say yes, but more for Japan than America. You can imagine their perplexed looks. While that was true, I also have to be intentional to live wherever I am. Because I have lived in other places, when things get tough my temptation is to imagine myself somewhere else. Somehow I always leave out the messy stuff. No place can solve people’s problems or magically make us happier, there is no place that will fulfill all your desires and dreams. Instead, building community and living purposefully make life worth living – wherever it is.

Those are just some of the things I’m working through and learning about myself right now. Feeling nostalgic, I posted some pictures of my family I have all over the world. 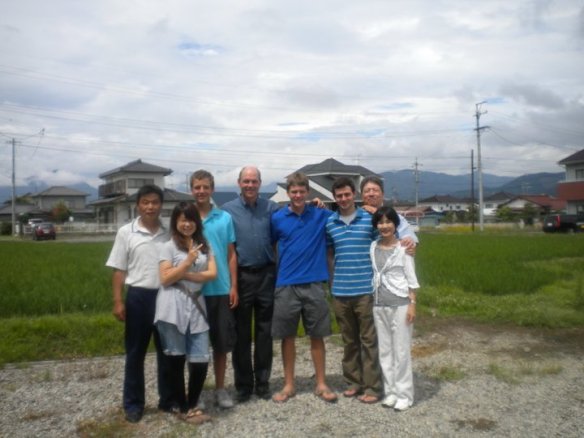 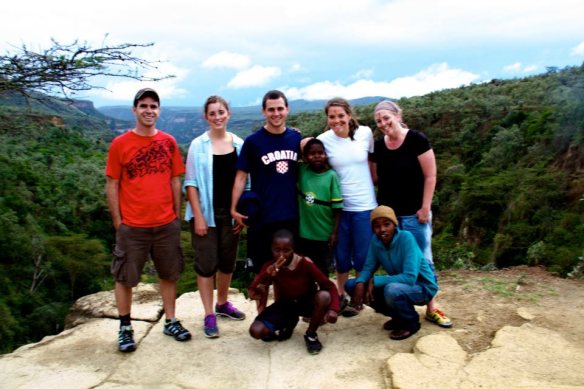 A Throwback from Kenya 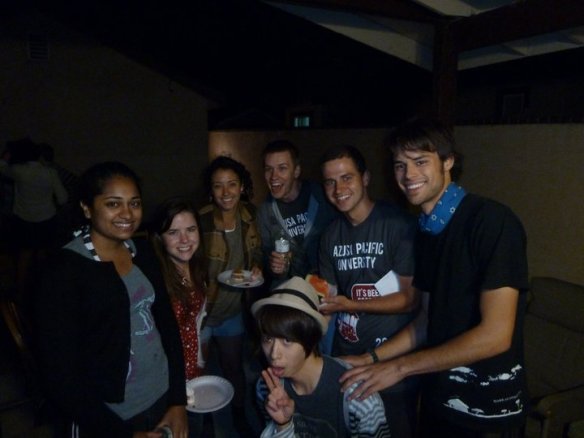 These people were my college family