After two days in Lusaka, I packed my bags and headed for Livingstone – home of the world-famous Victoria Falls and supposedly the highest volume waterfall in the world. Despite this distinction, I didn’t visit the falls the day after I arrived, deciding instead to sleep in and chill out for a much needed day of rest. I stayed at Jollyboys in Livingstone, a really cool backpackers hostel in town, complete with a swimming pool and restaurant. I read for half the day, then met some Japanese JICA (Japan’s equivalent of Peace Corps) volunteers and hung out with them the rest. I barely left the Jollyboys compound.

I did visit Victoria Falls the following day. I’ve never seen so much water in my life. The flat, somewhat boring drive to the falls is deceptive – all of the sudden you see huge spouts of mist rising into the air and you know you’ve arrived. Walking into the park, from several hundred meters away you hear the primordial roar of the waterfall. You finally see it and think, “how can that much water pour down from a single place?” And then the water fall continues – for another 1.7 kilometers. Being the wet season, the volume of water was even more than normal and at times we couldn’t see it at all because of the intense spray. In fact, the spray was going so high that it was raining from a blue sky in the forest next to the falls. At one point we crossed a bridge and a solid sheet of water hit us the entire way. We were soaked, but loved the experience.

Unfortunately Victoria Falls broke my iphone camera despite my best attempts at keeping it dry with a plastic bag. I did take some pictures before walking through the spray though. 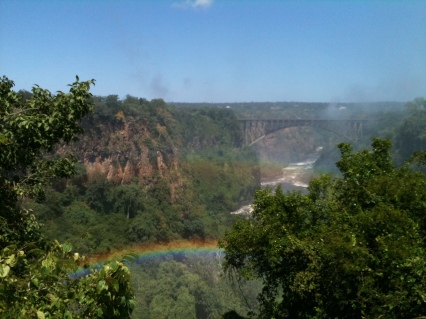 After seeing the falls up close and doing an hour-long hike to The Boiling Pot on Zambezi River, my travel companions were set on bungee jumping. They wanted me to join them, but having done it once in New Zealand, I didn’t feel the need to prove myself again. Adding to my misgivings was the fact that the rope on this particular bungee famously broke last year, plunging the jumper into the water. Check out the YouTube Video here if you haven’t seen it yet. Of course this didn’t happen again, but I’m sure everyone was thinking about it as they took the dive 🙂

While everyone was bungee jumping, I was busy bartering with Zimbabwean trinket-sellers. In Lusaka people told me to take clothes to the market to trade, so I brought an extra white T-shirt today to see what would happen. Sure enough, they wanted the shirt for a copper bracelet so I made the trade. They also wanted the flip-flops off my feet, but I told them I needed these to return home. Last but not least, I bought a 50 trillion dollar bill from Zimbabwe for a whopping $4 US. Unfortunately it’s worth nothing because Zimbabwe uses US dollars these days, but I can now say that I’m a 50 trillionaire.

My last day in Mbeya, I bought a ticket to my next destination: Lusaka, Zambia. you show up in African bus stations and a swarm of people surround you asking where you’re going. Everyone tries to pull you onto their bus, and when you choose one, the guys who lost out do a lot of shouting and shoving. Mbeya was no different and the guy who I chose took me to his sketchy office to buy my ticket. Since the buses are not licensed to carry people all the way to Lusaka, I was told I would have to get off the bus at the border, get my visa, walk across, and find the agent who would get me onto a bus on the other side. I was convinced I had been frauded again and would never see a bus in Zambia. Surprisingly though the agent met me at the border, helped me the entire way, and got me onto the Zambian bus.

Even though it was another 18 hours to Lusaka, the trip was vastly better than the Tanzanian one. This bus had air conditioning, seats that leaned back, and a toilet on board! I had never experienced these luxuries in East Africa. My greatest fear in traveling overnight was arriving too early in Lusaka while it was still dark. Being white in an African city by yourself at night is usually not the greatest idea, especially when you haven’t made arrangements for your hotel yet. Thankfully, we pulled into town just as the sun rose over the horizon.

Since there aren’t famous sights or tourist attractions in Lusaka, my goal was to make as many connections as possible. I met with a guy who works for Zambikes, a local company making hand-made bamboo bicycles – among other products – and the Zambian director of Campus Crusade for Christ. It was fun meeting people, sharing meals, and finding more about the country through the locals.

It’s really interesting to compare the countries I’m visiting now to Kenya where I’ve spent the most time. Making an analogy, I would say Zambia is to Europe as Kenya is to the US. Zambia is a little more refined, nicer and more organized while Kenya is fast-paced, busy and where things are happening. A final note on my sleeping arrangements: sharing a room with Africans is terrible. They wake up exactly at the crack of dawn every day, and begin turning the light on, joking and laughing in the room. When I told them that people were trying to sleep they laughed at me, said it was 6 O’clock already and kept talking.